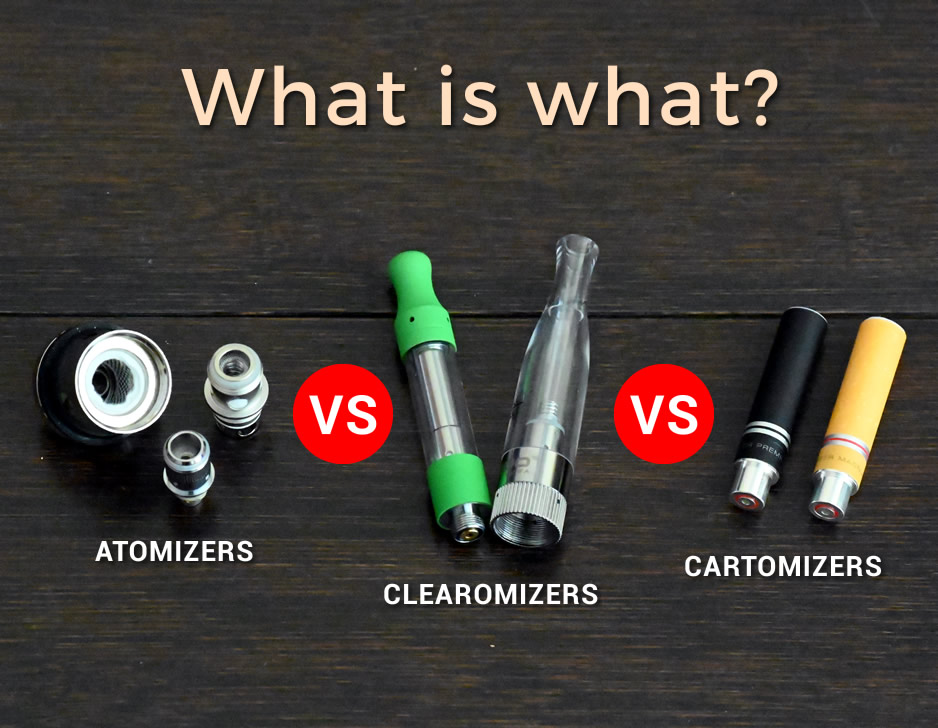 Atomizer vs Clearomizer vs Cartomizer: What’s What

If you are relatively new to the world of vaping, then you may be wondering about terms like “clearomizer,” “atomizer,” and “cartomizer” – what they mean and how they differ from each other. These terms are often used to describe a range of similar devices, which means that it’s a good idea for vapers to understand their differences to ensure the best overall vaping experience.

As vaping is still a relatively new innovation, its terminology naturally continues to evolve. Devices can be used a various ways, and words are often used interchangeably. This can be confusing for newer users, particularly those who are looking to purchase their first vape mod and aren’t sure how to choose the right one. Let’s take a look at the basics of atomizer vs cartomizer vs clearomizer to help you choose the best device for you.

What is an atomizer?

At first, in the vaping industry, the term “atomizer” referred to any vape tank’s coil. The coil is an important part because it is the part of the tank that generates heat and produces vapour. Over time, vapers began to use “atomizer” in a broader sense to refer to the entire vape tank. So, what is an atomizer vape? Today, the word “atomizer” is usually used as an umbrella term that includes rebuildable vapes, which give the user the freedom to construct and install their own coils. You may still hear some people use this term for non-rebuildable tanks, but in general, the word “atomizer” will most often refer to rebuildable devices.

What is a clearomizer?

The word “clearomizer” generally refers to the most popular devices in the vaping world and has continually referred to a wide range of tanks. The word itself combines two words – “clear” and “atomizer” – and it’s easy to see why. A clearomizer typically includes a clear tank (either plastic or glass), a chimney, a replaceable coil, and a mouthpiece. Technically, all vape tanks that use replaceable coils are clearomizers. However, the term is most often reserved for MTL tanks these days. These tanks usually come with 510 connectors, which allows vapers to use them with a variety of vape pens and mods. Some clearomizers do come as non-removable parts of kits, but these are becoming less common. It’s worth noting that, while sub-ohm tanks do fall into this category, vapers tend to call them sub-ohm tanks – not clearomizers.

What is a cartomizer?

The cartomizer is the last type of device in our clearomizer vs atomizer vs cartomizer discussion. In years past, vapers had only one option: the cartomizer. Many experienced vapers will tell you that this is how they got into vaping in the first place. A blend of the words “cartridge” and “atomizer,” a cartomizer typically comes pre-filled and is designed to be replaced after it runs out of liquid. The device itself attaches to a battery to form a shape that loosely (or more closely) resembles that of a cigarette.