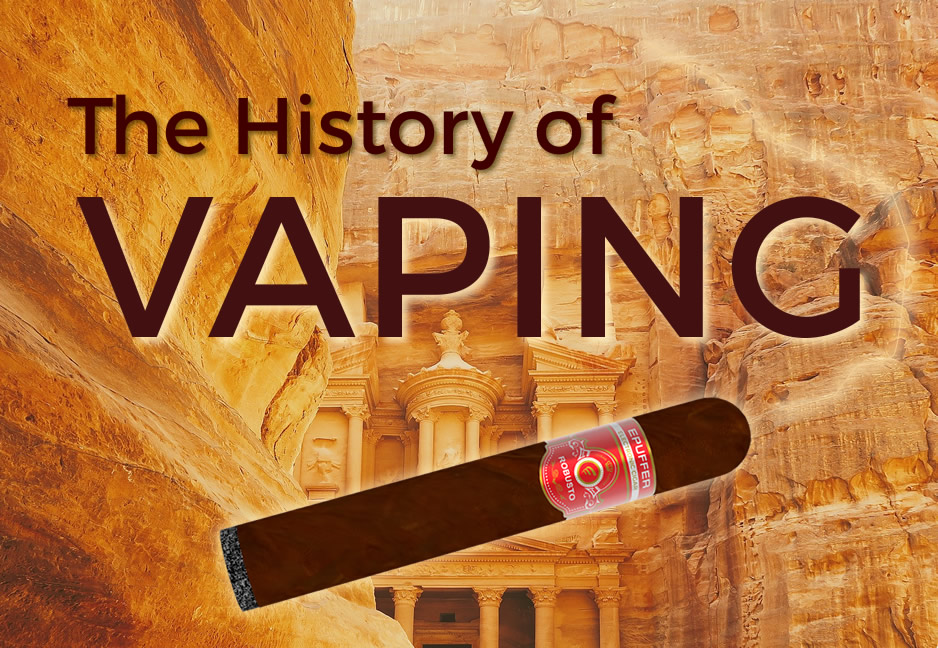 It’s true that the modern concept of vaping is relatively new.

However, the vapourization of substances is an ancient recreational and spiritual practice. Therefore, the question “How long has vaping been around?” is a little tricky to answer. The actual date of the beginning of the practice is unknown, but we do know that the ancient Egyptians vapourized select herbs using hot stones. This process was completely different from simply burning the herbs. The hot stones vapourized the natural oils within the herbs without leading to combustion.

This original vapourization practice eventually evolved into the hookah in India. Similar to the Egyptian method, the hookah utilizes hot coals to heat the material. The vapour created travels into the water chamber and into the user’s mouth via a special tube. The hookah may not be considered “vaping,” but it is actually quite close to vaping and is certainly a precursor to the modern vape. These two methods of vapourization would later give way to the creation of modern vapes.

The first modern e-cigs appeared on the market in the early 2000s. However, several designs and patents predated this version of the device by several decades. Joseph Robinson developed an earlier concept of the e-cigarette in 1927, although his creation was never brought to market. Robinson’s device was meant as a medicinal instrument designed to administer specific medical compounds.

It wasn’t until 1960 that Herbert A. Gilbert submitted a patent for e-cigs. Like Robinson, Gilbert used an electronic heating element; unlike Robinson, Gilbert also included a battery in his final product. He did produce prototypes and a few commercial offerings, but his “vape” ultimately failed because it simply wasn’t viewed as fashionable at the time. However, vaping was gaining ground in Europe, and in the 1990s, Bill Amato came up with the first cannabis vapourizer.

All of these inventions were innovative in their own way yet failed to make it to market or have any direct impact on the world. Later, Hon Lik, a Chinese pharmacist, would set out to show the advantages of vaping and inadvertently launch the entire industry.

Lik, a lifelong smoker, began working on a way to consume nicotine without all the chemicals present in traditional cigarettes. His design consisted of a small lithium battery and a tube to atomize e-liquid. This rudimentary construction would serve as the foundation for all e-cigarettes going forward. In 2006, Lik’s employer helped him introduce his e-cigs in Europe. Following their success, the first ePuffer e-cigs, e-cigars and e-pipes appeared in the US and Canada on January 5th. 2007, and continue to evolve and gain popularity today.

The evolution of vaping

Like any technological innovation, Lik’s invention evolved to accommodate the varied wants and needs of modern consumers. The tanks and coils of vapes have changed dramatically over the years, with most contemporary offerings being sub-ohm for maximum flavour and vapour production. Vapes have become much more customizable to appease both cloud chasers and hobbyists and to give users more control over their power, portability, and overall experience. Temperature control is one such evolution that allows vapers to control the amount and flavour of their vapour as well as its heat.

Since the very first e-cig was introduced to the market, the industry has shown no signs of slowing. Pod systems are the latest major innovation in vaping, with devices that favour efficiency, portability, and ease of use. These devices are particularly suitable for new vapers who want an affordable and hassle-free option that works just as intended. There have also been innovations in e-liquid, such as the newer nic salt vape juice. There are also “vape” versions of many popular smoking devices, such as the e-pipe and the e-cigar.

Now, the next time someone wonders, “How long has vaping been around?” you’ll know the answer.

Photo by Ekrulila from Pexels