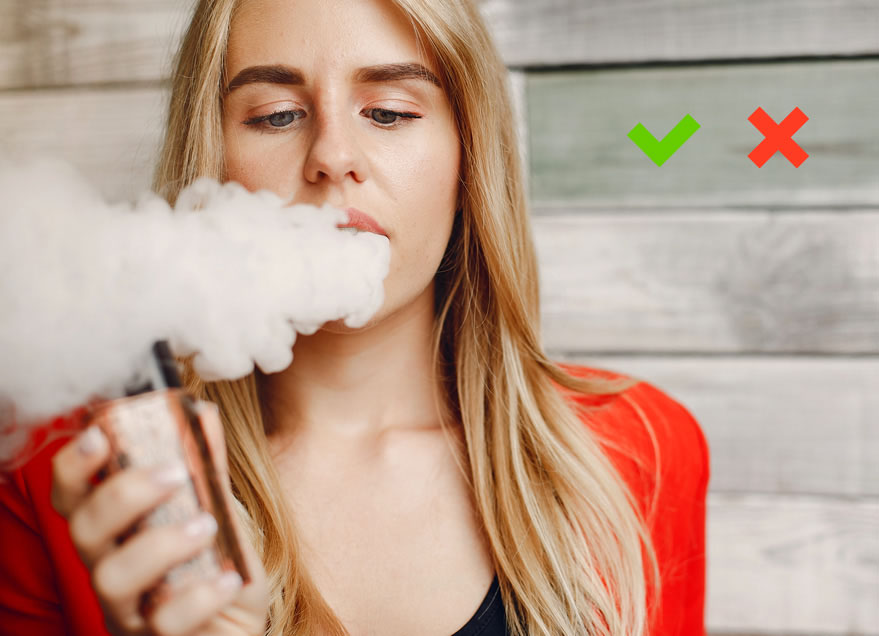 Vaping has become more and more commonplace as people increasingly seek to make the switch from tobacco cigarettes to e-cigs. It’s so popular, in fact, that it’s hard to go out in public without seeing at least one or two people vaping – walking down the street, in their cars, or even discreetly inside certain buildings. Because vapour is so much less noticeable and problematic than smoke, many people have gotten comfortable vaping in a wide range of locations. With that in mind, let’s take a closer look at some common questions about vaping etiquette and how you can vape to your heart’s content without ruffling feathers or breaking the rules.

When can I vape in public?

Can you vape in public – and if so, when and where? Many people aren’t sure where they are permitted to vape, especially when it comes to restaurants, cafes, bars, and other indoor locations where smoking was once allowed. The general public has become accustomed to these areas being smoke-free, and although vapour is not smoke, its smoke-like appearance and the abundance of misinformation around it has caused many people to be afraid of exposure. In general, you should defer to any vaping laws in the area, which will vary from place to place. And always follow the golden rule of vaping: When in doubt, ask.

Can I vape in public… outdoors?

You may live in an area where it’s hard or impossible to find indoor spots where it’s okay to vape, but things get a lot easier when you’re outside. The already-fragile arguments around potential health risk fall flat outdoors, as do any concerns that your vapour might even be intrusive to the people near you. In most cases, you can easily vape outdoors without anyone even smelling your e-juice. In general, just be considerate of the people around you, and you won’t run into too much trouble vaping outdoors in most locations. However, again, learn the local laws and policies and follow them to avoid a hassle.

It’s more or less impossible to smoke where smoking is banned – everyone in the room will know what you’re doing within seconds. This isn’t necessarily the case with vaping, as your vapour has a mild and pleasant smell and the cloud dissipates quickly. Especially if you are not cloud-chasing with a large vape mod but rather vaping discreetly on a basic e-cigarette, then it’s unlikely anyone will notice. We aren’t saying it’s advisable, but the majority of vapers have probably sneaked puffs now and then without consequence. There is a caveat, though: definitely avoid stealth vaping in situations where it could get you in real trouble or have serious negative consequences, such as on an airplane or while waiting for a job interview.

Is it okay to vape around kids?

The short answer is that it depends on the situation and it depends on the kids. In general, people who don’t like vaping will like it even less when their children are present. Besides their concerns about the potential health risks, they’ll also be worried about “setting a good example.” You’ll have to judge each situation on a case-by-case basis here. For example, you probably don’t want to sit in the car line picking up your child from school and blow billowing clouds out of your car window onto the other kids waiting to be picked up. On the other hand, if you’re in an outdoor area with plenty of space or in, say, a vape store and someone arrives with a child in tow, there’s probably no reason to stop what you’re doing.